“To receive this level of support and recognition, at a national level, is outstanding. It just goes to show how precious Blue Whales are to the broader community and how we must never give up our effort to continue our research and secure long term conservation of the species”, said Dr. Peter Gill CEO and Senior Research Scientist of Blue Whale Study. 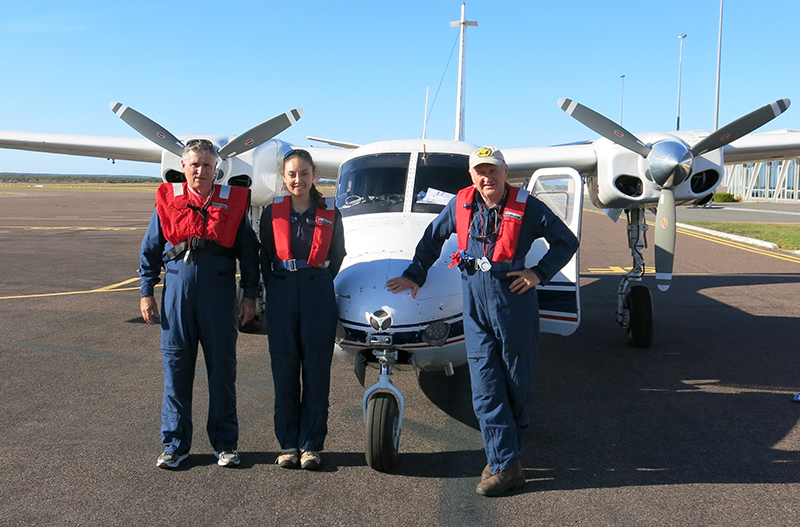 Dr Pete Gill (right) with Andrew Levings and Maria Garcia, about to head off on an aerial survey through the 2015-2106 whale season.

Australian Geographic Society works to protect endangered species and the July/August 2016 edition of Australian Geographic magazine provided an in-depth article on blue whales and launched the fundraising campaign under the banner ‘Big Blue Needs You’. In addition the magazine contained a Whale Poster which was drawn by local artist Brett Jarrett. “How often does it happen that the artist and researchers in the same article only live a few miles apart? We are fortunate to have this synergy in our area and thanks to Australian Geographic for bringing us together”, said Dr. Gill.

The funds raised shall be allocated to the 2016/17 blue whale season which commences in October/November this year. “We have funding to conduct one aerial survey however ideally we should conduct 2 or 3 each season. With the Australian Geographic Society funds we are now in a position to conduct a second aerial survey which is critical in our efforts to identify individual blue whales and to report on the seasonal variations and monitor blue whale movements in the Bonney Upwelling area”.