When the coastal krill Nyctiphanes australis is abundant it often swarms at or near the surface, but for a number of years we have had few sightings of krill surface swarms. This has been disappointing as abundant surface swarms are not only a sign of a productive upwelling season, but they make it easier for blue whales to find and consume their prey. In turn this makes it easier for us to find and study the whales and their behaviour. The apparent shortage of krill has coincided with a number of ‘lean’ blue whale seasons, during which the whales have been difficult to find in the vicinity of Portland, roughly the geographical centre of their upwelling feeding ground. The 2016-17 season was shaping as yet another lean season, with few sightings of blue whales reported to us, and no evidence of abundant krill.

This changed on 28 February 2017 when we flew our first aerial survey of the season, funded by Australian Geographic and the W.V Scott Estate, which covered the continental shelf between Beachport, SA and Port Fairy, VIC. We saw the first blue whale soon after leaving Portland airport, the first of 11 during the survey. While sighting 11 blue whales was rewarding but not exceptional in terms of our surveys, it soon became evident that the real story of the day was the abundance of krill. There were thousands of swarms right across the survey area but most abundant in Discovery Bay to the west of Portland. All the blue whales sighted were close to krill swarms, but only one of them was actually feeding; the others were moving very slowly, most likely well fed and in no hurry to move elsewhere.

We have long been trying to understand the dynamics of the upwelling and how it influences krill abundance – the key to understanding blue whales in the Bonney Upwelling. The 2016-17 upwelling season was unexceptional, with only weak upwelling up to the date of our survey. However, the previous (2015-16) upwelling season had been relatively strong and the abundance of krill this year may be a consequence of oceanographic conditions a year ago.

Interestingly, two days after our aerial survey the first strong, sustained upwelling event of the season commenced. Only a week before the aerial survey we had been out in our boat in the area where some of the blue whales were sighted, and had seen no sign of krill or whales. Were they somehow responding to environmental signals that heralded the belated onset of upwelling in the region? 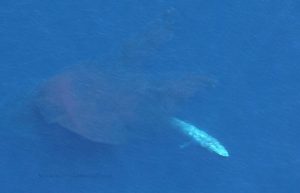 A blue whale surfaces through a krill swarm without feeding, suggesting it was already full